He Knows You Now… and Later

Home / He Knows You Now… and Later

When the Lord is introduced to Simon the fisherman it is indicated that both the invitation and the invited man are all part of a plan. What initially looks like human initiative on the part of Andrew is eventually revealed to be Heaven’s idea (John 1:41-42; 6:70). Upon seeing the fisherman Jesus declares who Simon is in the now of that encounter and who he will be later. In that first meeting Jesus says that Andrew’s brother is Simon the fisherman and son of Jonah (John 1:42); the text implies this is stated by Jesus prior to Andrew’s introduction. Not impressed? We are apt to overlook this subtle display of Jesus’ amazing insight: Jesus knows who Simon is (name, relatives, etc.) without the aid of an investigation (John 2:23-25; 1 Kings 8:39; 1 Chronicles 28:9; Jeremiah 17:10). The Lord knows who we are right now apart from anyone telling Him.

And then there is Jesus’ declaration of future things: Simon shall be called Cephas. In the absence of miracles that prove Jesus’ ability to know (1) the hidden things of the present and (2) unforeseeable things of the future the statement that Simon would be Cephas probably appeared enigmatic, arbitrary, and more than a little arrogant. But that simple statement would be of great comfort later. In a future time and on a personal level “You shall be called Cephas (translated a stone)” would speak volumes of hope to a man whose loyalty to the Lord was found to be anything but rock solid when he faced adversity.

Where many would be ready to write off the Simon as a deserter, Jesus said that one day the fisherman’s faithfulness would be the stuff of legend. Where many of us would have written Simon off because of his mistakes ,Jesus kept on investing in him. Indeed, Jesus declared in the new name Cephas (translated a stone) that one day the invited man would be stalwart, staying the course in the face of threats (Acts 4:13-20), and steadfast in faith even as he is led to his own crucifixion (John 21:18-19; 2 Peter 1:13-14).

Just like Simon the Lord Jesus knows you now and later. Jesus knows who you have been, who you are, and who His grace will make you to be (1 Corinthians 15:10; Galatians 2:8; Philippians 2:13). The journey toward a later life that will become the stuff of legend begins with accepting His invitation now. How? It cannot be any simpler than the decision to place the treasure of your trust in Him (John 3:16). The journey begins when you stop trusting in yourself to make up for your mistakes and to earn favor with the Father; it commences when you begin trusting that Jesus’ death on the cross has more than made up for your sin and that He can be trusted to lead you today. That kind of trusting leads to new life. A life that is pardoned, a life that is full of purpose, and a life that can experience amazing joys… now and later.

In His grip by His grace,
An Invited Man 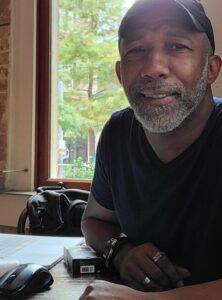